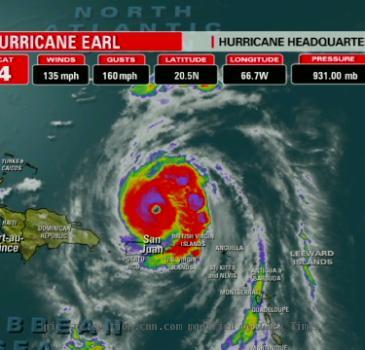 FLORIDA (GaeaTimes.com) — After Ocracoke islands, US authorities have finally decided to evacuate the East Coast region which is likely to hit by Hurricane Earl soon.

The hurricane has strengthened into a category 4 storm again, generating a wind speed of 215 km/hr (135mph). The most powerful category is 5 with winds 155 mph and higher.

Hurricane warnings were posted for most of the North Carolina coast, with a hurricane watch extending to Delaware and part of Massachusetts.

Earl was expected to reach the North Carolina coast on late Thursday and to wheel to the northeast, staying offshore while making its way up the Eastern Seaboard. But forecasters said it could move in closer, perhaps coming ashore in North Carolina, crossing New York’s Long Island and passing over the Boston metropolitan area and Cape Cod.

Also on Wednesday, the seventh tropical storm of the season formed far out in the Atlantic. Tropical Storm Gaston had sustained winds of 40 mph and is expected to strengthen into a hurricane this weekend as it moves toward the Leeward Islands. Tropical Storm Fiona remained north of the Caribbean with winds of 60 mph and is expected to move toward Bermuda over the next several days.

Is Palin cheating to get votes for daughter in 'Dancing with the Stars'?

LOS ANGELES - For the seventh consecutive time, Sarah Palin's daughter Bristol has been voted by v...

WASHINGTON - Former United States President George W. Bush is pleased that he is once again living a...

Bush has forgiven Kanye West for calling him 'racist'

MELBOURNE - An 18-year-old Florida teenager thief left his MySpace account logged in the computer of...
Copyright© 2010 The Gaea Times