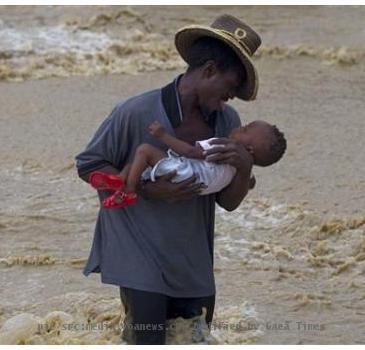 PORT-AU-PRINCE, HAITI (GaeaTimes.com)- Hurricane Tomas killed around six people and destroyed land and homes in Haiti as it continued to change its position and move away from land today. However, the natural disaster made people homeless and they would still have to grapple with effects after Hurricane Tomas dissipates. National Hurricane Center in Miami, Florida reported that last night Hurricane Tomas was about 275 miles north-northeast of Grand Turk Island and about 570 miles south-southwest of Bermuda.

The Hurricane center reported that the hurricane was accompanied by heavy rainfall and winds of 80 mph and it headed north-northeast at 10 mph. While on one hand the state is struggling to keep up with the cholera outbreak, on the other hand as Hurricane Tomas passed Haiti, it brought heavy rainfall which caused floods in extensive area and increased risk of cholera all the more. Relief worker Roseann Dennery said that in Leogane, west of Haiti’s capital of Port-au-Prince, residents waded in knee deep water. Meteorologist Reynolds Wolf said that there is still a risk of mudslide as many of the mountains of nation has been stripped off vegetation and it means that rain can flow down easily.

However, the major concern of the Government is that the rain and flood could help spread cholera via dirty and stagnant water. Christian Lindmeier, spokesman in Haiti for the Pan American Health Organization/World Health Organization said that the infection rate is expected to “jump-up” due to flooding and “bad sanitation” in many areas. The Canadian medical director of Samaritan’s Purse, Dr. Kara Gibson said that the outbreak of cholera will be “huge”. The country’s health ministry has reported that the death toll has exceeded 500 owing to cholera and Hurricane Tomas might worsen the situation.