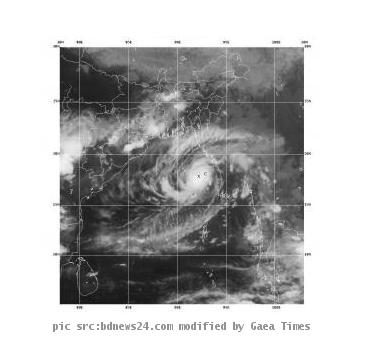 DHAKA, BANGLADESH (GaeaTimes.com)- Cyclone Giri has attained extensive momentum on Thursday evening and has been upgraded into category 1 storm, weather officials have stated. Following the strengthening of the storm along the Bay of Bengal, parts of Bangladesh have been put under high alert especially the ports along the coastal regions of the country. The weather agency in Bangladesh issued a weather bulletin in the wake of the storm which revealed that Cyclone Giri centered at a distance of 500 kilometers in the southern part of Chittagong port at 3 pm (0900 GMT) on Thursday.

As Cyclone Giri is expected to gain more force in the upcoming days, the fishing boats and trawlers along the North Bay as well as in the deep sea have been suggested to stay near the shore and should go ahead with utmost caution until any further notification is issued. At the same time, the maritime ports of Chittagong as well as Cox’s Bazaar have been asked to display local warning signal number four while the port at Mongla has been urged to put an alert of local cautionary signal number 3. The Met Office has predicted that Cyclone Giri would be intensifying with gusts of up to 88 kilometers per hour as it gradually makes its way towards the northern coast.

The Joint Typhoon Warning Centre of U.S Navy has reiterated that the Cyclone Giri would grow in terms of wind speed as it has already attained sustained wind force of 83 to 102 kilometers per hour. Moreover, it has been reported that the storm is likely to showcase typhoon strength until it makes landfall along Southern China as early as Saturday morning.