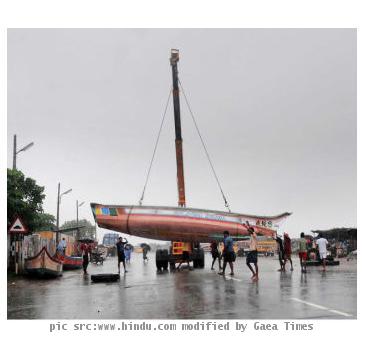 BHUBANESWAR, INDIA (GaeaTimes.com)- Despite weather officials predicting that Cyclone Jal has lost momentum on Sunday, parts of Orissa are expected to be lashed by heavy rains in the upcoming days. According to weather officials, the deep depression that was hovering over the southwest part of the Bay of Bengal has been downgraded into a low pressure although earlier predictions pointed out that unfavorable weather conditions could spark extensive damage keeping in the view the increased strength of Cyclone Jal. In the wake of the adverse weather, fisherman along the coastal areas of Orissa have been asked to stay away from the sea to ensure their safety.

An officials of the Bhubaneswar meteorological centre has revealed to media outlets that Cyclone Jal is focused on the south-west direction of the Gopalpur town of the Gunjam district of Orissa and at a distance of 320 km in the east-south-east part of Chennai. At the same time, the weather official also pointed that despite the weakening of the cyclone into a depression, torrential rains as well as thunderstorms are likely to take place in extensive parts of the state. Although it has been confirmed that Cyclone Jal has lost force since Sunday evening, two ports in the state, Gopalpur and Paradip have been asked by weather officials to continue displaying distant warning signals while the alert that had been issued to fishermen also remains active.

Prior to its weakening, Cyclone Jal has already caused widespread damage in parts of Tamil Nadu, disrupting normal life and flooding low-lying areas. At least two people have lost their lives in the state due to rain-related incidents.

CHENNAI (GaeaTimes.com)- As the people of Tamil Nadu braced themselves for rough weather by shut...
Copyright© 2010 The Gaea Times