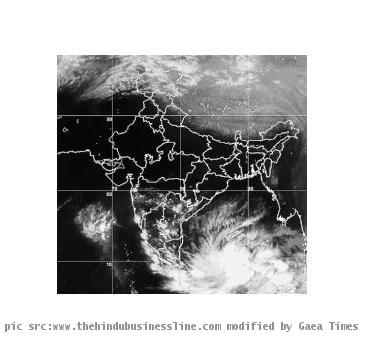 HYDERABAD, INDIA (GaeaTimes.com)- Officials in the state of Andhra Pradesh are bracing themselves for unfavorable weather conditions after Cyclone Jal gradually neared the coastline of the state from the southwestern part of Bay of Bengal. According to the India Meteorological Department (IMD), a deep depression gained strength and intensified into a severe cyclonic storm and it had its epi-center at a distance of 1485kms in the south-southwestern direction of Chittagong port and 1405kms away from the Cox’s Bazar port. In the wake of the adverse weather conditions, the weather officials have warned fisherman to refrain from venturing out into the sea in order to avoid any untoward incident.

Meteorologist Prasada Rao, who is associated with the Vishakhapatnam based Cyclone Warning Centre told reporters that the deep depression that had formed over the Bay of Bengal has turned into a cyclonic storm and it is likely to intensify even more while it makes its way along the north-western direction. Officials have warned that the Cyclone Jal can cause widespread damage to houses in coastal areas while minor disruptions in power lines and communication can also take place. Parts of Andhra Pradesh and Tamil Nadu are expected to be lashed by heavy rains as well as thunderstorms when Cyclone Jal makes landfall in the region.

In the meanwhile, with the aim of minimizing the extent of damage, authorities in Andhra Pradesh have evacuated extensive areas along the coastal regions after the India Meteorological Department (IMD) issued the warning that the depression along the Bay of Bengal has upgraded to a ’severe cyclonic storm’ which has been named Cyclone Jal.