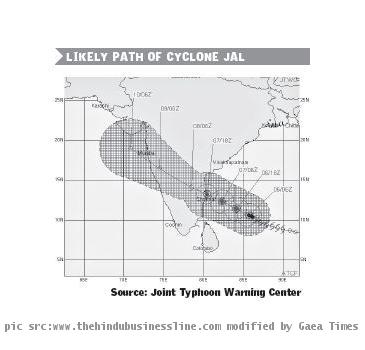 HYDERABAD, INDIA (GaeaTimes.com)- It has been reported by India Meteorological Department (IMD) that Tropical Cyclone Jal which has gained strength, could intensify into a severe cyclonic storm and hit Chennai and its neighboring areas by later today. The cyclone has already hit Sri Lanka and there is a huge possibility of heavy rainfall in the coastal region of Tamil Nadu and Andhra Pradesh anytime today. Officials have already started the evacuation process and moving people to safer places while temporary relief camps have also been set up.

India Meteorological Department (IMD) has warned that Cyclone Jal will be accompanied by gusty wind of about 65-75 kph and might reach up to 120-140 kph. The government has stopped fishing activities in all the danger prone areas. The storm remained stationary and lay centered 650 km east-southeast of Chennai and 750 km southeast of Nellore yesterday morning but it is expected to cross north Tamil Nadu and South Andhra Pradesh coasts between Puducherry and Nellore by tonight. IMD has forecast isolated rainfall to very heavy rainfall in south coastal Tamil Nadu in the next few days.

Revenue Minister of Andhra Pradesh, Dharmana Prasada Rao has announced that the severe cyclonic storm will affect about 8 lakh people in the districts of Nellore, Guntur, Prakasam. Chittoor, Krishna. He also said that schools and offices have been shut down in these districts until the weather department gives any further notice. The officials said that rough and stormy wind speed reaching 65 to 70 km per hour would prevail along Tamil Nadu and Puducherry coast and the city would experience heavy rainfall on Monday as well. National Disaster Response Force officials have been stationed at Arakkonam in Tamil Nadu and Nellore districts for rescue operations because of Cyclone Jal.

CHENNAI (GaeaTimes.com)- As the people of Tamil Nadu braced themselves for rough weather by shut...
Copyright© 2010 The Gaea Times