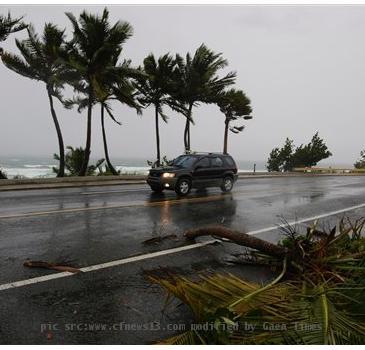 FLORIDA (GaeaTImes.com) — Tropical storm Fiona is being regularly tracked by National Hurricane Center. According to today’s report, the storm is moving across the Atlantic and islands which were threatened by the storm Earl, are now likely to face Fiona.

The National Hurricane Center’s forecast track shows that by Saturday, Fiona still will be only a tropical storm, and will be hundreds of miles east of northern Florida, heading for a collision with the Carolinas or New England or an ignominious fizzle in the North Atlantic. The storm is now about 500 mile east of Leeward islands and is moving at a speed of 24mph. Topmost recorded wind speed of Fiona has reached only 40mph barely making it a tropical storm.

Fiona is forecast to make a gradual turn to the northwest and speed up and only “slow” strengthening is expected in the next day or two.

NEW DELHI - Operations of All India Radio and Doordarshan were affected in different parts of the co...

LUCKNOW - The National Democratic Alliance (NDA) would return to power in Bihar, and the Congress' s...

PATNA - With the counting of votes for 243 Bihar Assembly seats scheduled for tomorrow, Chief ...

PANAJI - More than 4,000 films from the archives of Films Division of India (FDI) will be soon avail...