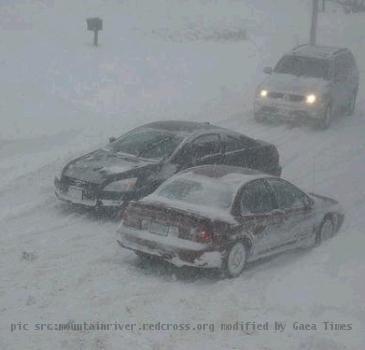 CAPE COD (GaeaTimes.com) — It seems Cape Cod is going to miss the old sunny days as the Cape and other portions around southeastern Massachusetts were hit by a snow storm today. The storm which has caused several traffic accidents is expected to leave about 4-8 inches of snow on the ground before it’s over.

The National Weather Service issued a winter storm warning through midnight for Barnstable County. Plymouth County and the islands of Martha’s Vineyard and Nantucket were under a winter weather advisory.

Although Boston is also experiencing snowfall, but only slight accumulation was expected.

Due to the snow, the highways and the roads have become extremely slippery and hence have resulted numerous crashes and spin-outs throughout the state. But fortunately, there were no immediate reports of serious injuries.

LONDON - The husband of the Indian-origin woman who was killed while honeymooning in South Africa af...

LONDON - The taxi driver who was behind the wheel when an Indian-origin woman was murdered after a c...

Brit-Indian honeymooner's wife's murder may be part of 'planned attack'

LONDON - The British project to develop the world's first 1,000mph car is on track. The construction...

LONDON - Brit-Indian Shrien Dewani, whose wife was killed during their honeymoon trip in South Afric...

LONDON - A new research on Kalahari Desert drongos, which act like gangsters running a protection r...

CAPE TOWN - Cape Town Police have arrested a second suspect in connection with the weekend death of...

LONDON - The Indian-origin bride, who was murdered in South Africa after the car she and her husband...
Copyright© 2010 The Gaea Times