Cruise Ship In Antarctica Out Of Danger 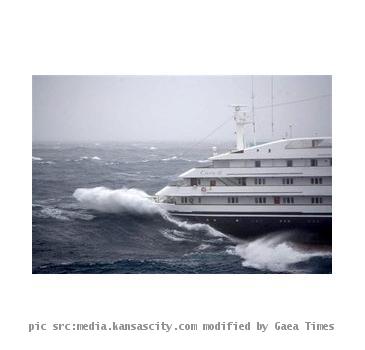 ANTARCTICA (GaeaTimes.com)- Clelia II a cruise liner that started its voyage to Antarctica from Argentina on Nov 30 ran into trouble in the frozen continent’s Drake passage when it was passing through inclement weather. The ship with 88 passengers as well as 77 crews onboard was tossed by the huge sea waves and also had to brave rough winds. A huge wave lashed the ship and after that the crew members realized that some electronic parts had got damaged. One of its engines was also damaged. The windows of the ship were also partially damaged after it got lashed by waves continuously. As one can understand the passengers were scared when all thee took place and some of them developed sea sickness though no one was injured. One crew member was slightly injured as reports came in. The communication system was also adversely affected by the fiasco as the ship crew said.

The cruise ship Clelia II sent emergency message to the Argentine Navy after it ran into trouble in Antarctic Ocean. It was helped out by a National Geographic ship and the latter accompanied it back to safety. The ships are returning to Argentina as per the latest reports. The International Association of Antarctica Tour Operators said that the situation is now under control and the relatives of the passengers in the ship need not worry at all.

The Cruise ship in Antarctica is in relatively better state now and it is expected to be back in Argentina soon. The relatives of the passengers in the ship earlier expressed their worries on social networking sites including Facebook.

WASHINGTON - Creating tiny air vehicles that mimic the flapping of winged insects is a popular notio...

GUANGZHOU - India made an euphoric start to its athletics campaign, winning two golds and one silver...

With surplus rooms after Games, homestay tourism gets a boost

NEW DELHI - The hotel rooms were ready but not many guests showed up. To overcome the dismal flow of...

Oprah lists Jay-Z's book, Lululemon as some of her favourite things

LOS ANGELES (GaeaTimes.com) -- If the rumors are considered to be correct, Tom Cruise and his be...