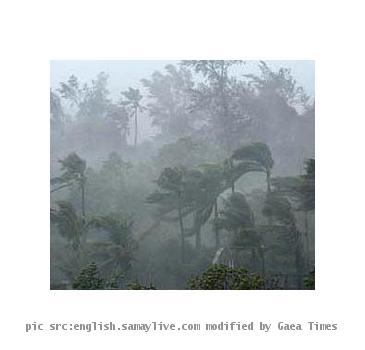 CHENNAI (GaeaTimes.com)- Last month the people of Chennai braced themselves for rough weather by shutting down all educational institutions, offices etc., when the Regional Cyclone Warning Centre announced that Cyclone Jal would hit the coast of Chennai. Later the Cyclone weakened and the people were could breathe a sigh of relief. However, like a bolt from the blue rain in Chennai has taken a heavy toll on human life. The local media reputed that more than 150 people were killed in Chennai were killed in heavy rains on the coastal regions of Tamil Nadu.

Government officials have already called an emergency and announced that all the educational institutes, offices and schools will be closed on Monday owing to heavy rain. The regions affected by Chennai rain are Cuddalore, Nagapattinam, Chennai, Trichy and some other regions near the coast of Tamil Nadu. The weather forecast department has announced that the low pressure trough in Bay of Bengal has created heavy flood and incessant rain in the Tamil Nadu region. The weather department has also announce that the rain will continue till Monday owing to the low pressure in the Bay of Bengal trough. Government officials have even warned fishermen not to venture into the sea as there might be heavy rain in the coming hours.

The security officials said that the death toll might increase owing to the Chennai rain. The local media reported that most of the death were because of lightning, electrocution, wall collapses and drowning in flood waters. Moreover, the media sources report that more than 1,500 head of cattle also perished in Chennai rain. Government officials would visit the rain affected areas and would hold meetings to discuss about damage of houses, crops, bridges and roads.

Underprivileged children enjoy a day of amusement in Chennai

CHENNAI - Over 2,000 underprivileged children enjoyed a day of entertainment including a platfo...

Perpetrators of 2G scam will be punished: Moily

As movies shrink into gadgets, young Indians watch on

NEW DELHI - Roman Polanski once said, "Cinema should make you forget you are sitting in a theatre." ...

2G scam: Maran defends himself against all allegations

CHENNAI - Union Textiles Minister Dayanidhi Maran on Saturday defending himself against all allegati...

GUWAHATI - A career fair is held for the disabled in Guwahati as an initiative to generate employmen...
Copyright© 2010 The Gaea Times