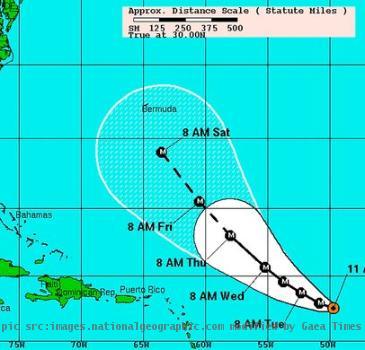 MIAMI (GaeaTimes.com)- Early on Monday the Miami-based National Hurricane Center reported that a powerful Category four storm, Hurricane Igor, is gaining strength over the central Atlantic and moving west at a speed of 10 miles (17 kilometers) per hour. At around 1500 GMT, the center reported that the storm’s maximum sustained winds has increased from 140 miles per hour to around 150 miles (240 kilometers) per hour over night. The storm on Monday was swirling 880 miles east of the northern Leeward Islands. The present situation of the storm has raised concern among the authorities about a possible flooding in the Caribbean islands including Haiti.

The National Hurricane center reported that on Monday night or by Tuesday the Hurricane Igor will expectantly take a turn towards the west-northwest direction with some decrease in forward speed. It predicted certain fluctuation in intensity during the next 48 hours that is on Tuesday and Wednesday. The center warned that Hurricane Igor bears the potential to become a category five hurricane by Tuesday. As per the center’s report, Hurricane Igor could not only brush the northern Caribbean islands but also possibly travel to Bermuda in due course.

Although as of yet, no hurricane watch or warning has been issued by authorities, it is feared that Hurricane Igor might unleash torrential rains in Caribbean basin including Haiti that is still recuperating from the massive January earthquake. Apart from Hurricane Igor, another tropical storm is gaining momentum off the coast of Africa across the Atlantic. Tropical storm Julia is expected to become a hurricane in the next few days and warnings have been already issued for the southern Cape Verde Islands.