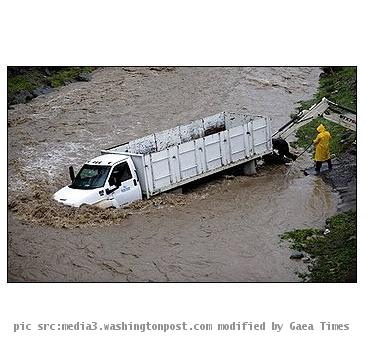 LOS ANGELES (GaeaTimes.com)- Over the past week, the U.S. state of California has witnessed a record rainfall in years which has triggered flooding and mudslides in many regions while also resulting in extensive evacuations amidst fears of further damage. Extensive parts of the state were at the receiving end of a heavy storm system that brought torrential rains along with it. The flooding as well as the mudslides came at the end of a week of adverse weather conditions during which the city of Los Angeles witnessed half of its annual rainfall within a span of just six days.

Gov. Arnold Schwarzenegger has announced a state of emergency in around six counties as the monsoon like weather conditions made its presence felt in large parts of California on Wednesday. Although the torrential rainfall has lost its grip to a certain extent, the ramifications of the unfavorable weather conditions is likely to be huge. Meanwhile, people residing on the foothills of the suburban parts of California have been ordered to evacuate their homes and move to safer locations so that any untoward incidents can be averted. Bob Spencer who is a spokesperson of the Los Angeles County Department of Public Works has said that the evacuation are of imperative importance as ‘the ground is so saturated it could move at any time.’

Adverse weather conditions such as heavy snow, torrential rainfall as well as a dip in the temperature has wrecked a havoc in the western region of United States throughout this weekend while the states of Oregon and California have been most affected.

WASHINGTON - A new study has pointed out that infants are more efficient at digesting milk than adul...

Solitary fish may be first model for human depression

LONDON - Zebrafish that stop swimming when left alone could be the first fish model of a human mood ...

LONDON - Scientists have successfully come up with an alternative to silicon that has superior elect...

WASHINGTON - A new study has found that lower-class people are better at reading emotions of others ...

LONDON - The next time you decide to buy those jazzy cartoon drinking glasses for your kids, better ...

Parker's move to file his own divorce 'upsets' Eva Longoria

WASHINGTON - Airplanes may soon start looking like birds as scientists are pondering over re-designi...

LOS ANGELES (GaeaTimes.com)- While many will remember this year's American Music Awards for th...

Malin Akerman to replace LiLo as Linda Lovelace in Inferno