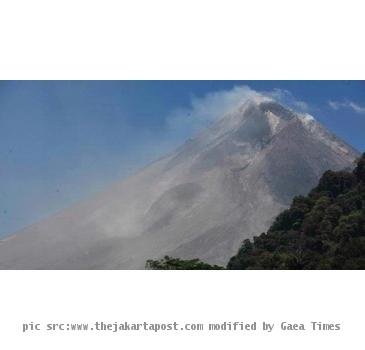 YOGYAKARTA, INDONESIA (GaeaTimes.com)- Indonesian authorities evacuated people residing in the slopes of Mount Merapi after an alert was issued following high seismic activity in the mountain. The villagers in the area have been asked to seek shelter in safer ground with people living within 10 meter zone of the mountain being evacuated without any delay. Officials have urged the government to take all the necessary steps to ensure minimum damage in case of a volcano eruption, as the seismic activity in Mount Merapi has increased considerably over the weekend.

A government volcanologist Surono has revealed to the media that the magma is just about a kilometer below the crater and it is gradually being pushed in the upwards direction owing to the high seismic activity. At the same time, it has been reported that although a volcano has not erupted in Mount Merapi, it has been spewing lava and an estimated 500 multi-phased volcanic earthquakes has also been recorded over the weekend in the mountain. Mount Merapi is known as one of the most active volcano’s of Indonesia which is often in news for its eruption leading to widespread damage to life and property.

Mount Merapi last erupted in the year 2006 when it claimed at least two lives. However, one of its most devastating eruptions took place way back in the year 1930 when at least 1,300 people were killed while many others were injured. However, volcanologist have reiterated that as of now, it seems unlikely that even if a volcano erupts, it would be able to extensive damage although the evacuation process is being continued to minimize damage.