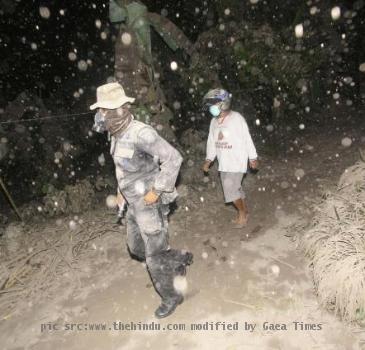 YOGYAKARTA, INDONESIA (GaeaTimes.com)- Mount Merapi which is known to be one of the most active volcanoes in Indonesia erupted once again on Monday morning, spewing hot lava and cloud of ashes across 1.5 kilometers along its radius. In the wake of the high seismic activity that the mountain has been displaying for the last few days, officials in Indonesia have confirmed that it would come as a bolt from the blue if another eruption takes place in Mount Merapi this week. The latest eruption in the mountain triggered a fresh wave of panic and chaos among the villagers who reside in the adjoining slopes of Mount Merapi as some of them had reportedly rushed back to their homes to check on their belongings and livestocks.

Since Mount Merapi spewed lava and ashes for the first time last Tuesday, large scale evacuations was undertaken by the Indonesian officials in order to ensure the full safety of the villagers residing in close proximity to the active volcano. Despite all the precautionary steps that was taken by the officials, in the repeated volcanic activity that lasted in Mount Merapi almost throughout last week, at least 34 people are already known to have been killed. While revealing details of the impending eruptions, volcanologist Surono validated that in the upcoming days more activity is likely to be displayed by Mount Merapi as all the energy has not been released as yet.

Although Surono has pointed out that as of now there is no need to increase the exclusion zone around Mount Merapi, it has been emphasized that given the high volcanic activity of the mountain, it is still not safe for villagers to return to their homes along the slopes.

Mahindra to take over Ssangyong

A glass of red wine a day 'can treat diabetes'

LONDON - Research has found that drinking a small glass of red wine every day can help treat diabet...

MELBOURNE - A security-check at Detroit Metropolitan Airport left a traveller covered in his own uri...
Copyright© 2010 The Gaea Times