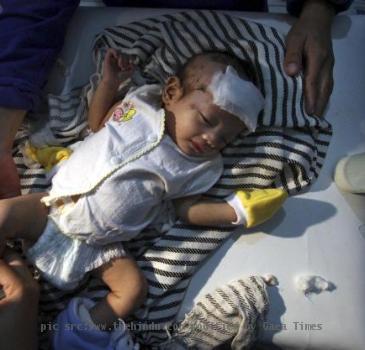 JAKARTA, INDONESIA (GaeaTimes.com)- The government in Indonesia is grappling with twin natural disasters that have hit the country in quick succession and rendered thousands of residents homeless. The tsunami toll is going up with time and the Mount Merapi has started erupting ash and magma stalling international flight operations at the same time. The government is on tenterhooks and trying desperately to ensure the safety of the affected people.

On Tuesday, the government in Indonesia mobilized navy ships and planes to provide aid to the victims of tsunami. A National Disaster Management Agency spokesperson has said that the telecommunication link is being restored and the weather is also showing signs of improvement. Hence, the rescue workers are reaching the affected region slowly which seemed impossible even a few days back. To aid the tsunami victims in Indonesia, 5 navy warships, a C-130 Hercules military cargo aircraft and six choppers have been pressed into service. A number of small sized vessels have also been put to use. The death toll has crossed 400 and 15000 residents have been displaced, say the latest updates. The rescue workers said that the survivors of the Indonesia tsunami need lots of tents, blankets and food to cope with the situation. Some of them also require counseling as they have lost their belongings and loved ones in some cases.

Indonesia is located on the well known Pacific Ring of Fire and thus it is quite vulnerable to natural calamities including quakes and tsunamis. However, the twin tragedies hitting one after the other have put the lives of the victims in jeopardy.