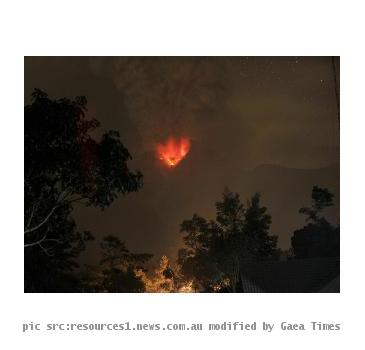 JAKARTA, INDONESIA (GaeaTimes.com)- The continuing eruption of Mount Merapi the Indonesian Volcano is still causing disruptions to international flight operations and it has also prompted the President of USA Barack Obama to cut short his Asia trip. The disruptions are causing the airlines to lose revenue and the fliers are at the receiving end. The death toll has shot up to 191 as the latest reports indicate. More than 300000 people are being forced to live in makeshift camps since the eruption is showing no sign of ceasing. The volcano Mount Merapi which stands for the “Mountain of Fire” is living up to its name. Even though the rate of ash and magma eruption has reduced to an extent some of the airlines like Qantas and Cathay Pacific have canceled their flights.

Cathay Pacific said in its statement in the site that it ” will monitor and assess the situation and the possibility of operating flights”. The air in Jakarta the capital of Indonesia remained smoggy though the traces of volcanic ash falling was not found. The US President said that the USA will stand by Indonesia since the nation is facing the blow of twin natural disasters. He was compelled to shorten his visit to Jakarta since the chances of volcanic ash affecting the engine of AirForce One are there.

The ongoing eruptions of the Indonesian Volcano Mount Merapi which has a history of erupting and causing havoc has made the residents frightened. The chances of further eruption cannot be ruled out said the volcano experts. The government is on tenterhooks and is monitoring the developments.

After 48 years, separated siblings bump into each other by chance!

LONDON - After almost five decades of separation, a brother and sister recently bumped into each oth...

WASHINGTON - India has topped the list of top ten nations that lacks sanitary facilities. In an i...

MELBOURNE - New details have revealed that the pilots of the ill-fated Qantas A380 flight QF32 were ...

MELBOURNE - Qantas' A380 flight QF32 passengers and crewmembers were "very, very lucky" that the hig...

NAIROBI/ABUJA - Nigeria's military has secured the release of 19 hostages being held by militants in...

GUANGZHOU - India's Jasvant lost a close fight against Indonesian Yulius Fernado 5:6 to bow out of t...

SYDNEY - A Qantas flight with 171 passengers on board was forced to return to Johannesburg in South ...
Copyright© 2010 The Gaea Times