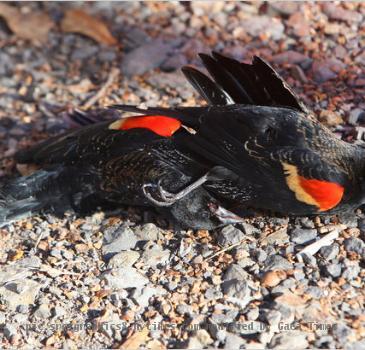 BEEBE (GaeaTimes.com)- The unexplained death of several thousands fish and red winged blackbirds in different parts of Arkansas in USA have made the scientists and animal researchers puzzled and the soothsayers are predicting about impending doomsday. The corpses of the several thousand drum fish were found floating in a 30 km radius on Arkansas river which made headlines a few days back. On New Year’s eve the Beebe residents in the state were taken aback after witnessing dead and dazed blackbirds raining on their home and streets. It was something they had never witnessed before. The Arkansas Game and Fish Commission said that the fish species was suffering from some disease as no other species was affected. A number of theories have sprung up after the mysterious death affecting the birds and Fish in Arkansas but the scientists are yet to reach a conclusion.

The corpses of the birds and fish have been sent for testing. The animal experts are almost convinced that the cause for the death of the fish and birds in Arkansas are different. The ornithologists think that it is possible that the Blackbirds were scared by the firecrackers bursting on the sky on New Year’s eve and they also have poor eyesight, which led to the mass death. Probably they were flying lower to avoid the explosions in the sky.

The dead birds and fish in Arkansas have made the residents puzzled and some of them said it was something really unprecedented, at least on such a scale. Some residents called the cops after seeing the birds dropping dead everywhere.

Taliban leader in secret Afghan talks was an impostor: Report

KABUL - The secret talks between the Afghanistan government and the Taliban to end the conflict in t...

BRISBANE - England off-spinner Graeme Swann has said that he is absolutely clear and deadly s...

WASHINGTON - Researchers from University of Missouri have developed a new test for salmonella in pou...

Buffy the Vampire Slayer to be turned into a movie

SYDNEY - Famous American TV series 'Buffy the Vampire Slayer' is set to be turned into a new Hol...

LONDON - The husband of the Indian-origin woman who was killed while honeymooning in South Africa af...
Copyright© 2011 The Gaea Times