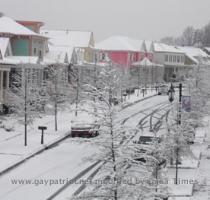 CHARLOTTE (GaeaTimes.com)- As the weather takes a nasty toll in various parts of the United States, many schools seem to have no other option left other than keeping themselves closed. As the National Weather Service was issuing out a weather alarm declaring that a winter storm is likely to hit the region in the afternoon, almost all the Charlotte-Mecklenburg schools opt for a closure. The school authorities have announced that they will conduct no classes on Monday.

The winter storm is expected to hit the city of Charlotte at around 4 in the afternoon for which all the pre-schools activities are suffering a delay. The weather department said that Monday night would perhaps bring in the worst chill of the season and there are high chances of a freezing rain on Tuesday. Although it has not been confirmed that the Charlotte-Mecklenburg schools will necessarily be closing the pre-school programs. A school authority official said that they are planning to shift the programs to the middle of the month. School authorities fear bus accidents that are very common due to the icy roads.

Private schools that have announced to remain closed amongst the Charlotte-Mecklenburg schools are the Charlotte Country Day School, Charlotte Christian School and Providence Day School and the Charlotte Latin. However, it was not only the schools that saw a change in schedule. Government offices also changed their meeting timings. The Charlotte City Council advanced their meeting from 7 p.m to 11 a.m. The dates for the rest of the meetings however, has not been fixed and are will only take place when the weather conditions improve. The Council’s Dinner Briefing which was slated to take place on Monday at 5 p.m has also been canceled.

Davis would love to star in 'Sex and the City 3'

LONDON - Actress Kristin Davis, who played the role of Charlotte York Goldenblatt in the "Sex and th...

LONDON - A prosthetic cancer survivor was asked to show her breasts to a security agent during pat-d...

LONDON - A survey of iPhone users has found that Welsh singer Charlotte Church is the celebrity Brit...

MELBOURNE - Australia's Next Top Model judge Charlotte Dawson, was left upset after her decision to ...

What makes one city better than another?

WASHINGTON - A research team has concluded that in terms of size, New York is just an average city...

WASHINGTON - A new research at the University of Sheffield has revealed that deaf adults can react m...

LONDON - Singer Charlotte Church had been missing her feminine curves ever since she had lost weight...

LONDON - Charlotte Church has revealed that she has gained some pounds back, as she 'missed' her boo...
Copyright© 2011 The Gaea Times