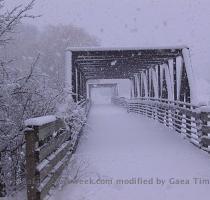 ATLANTA (GaeaTimes.com)- It seems like Atlanta has been struck amidst a winter deluge after a heavy snow storm blasted on the city on Sunday night. The snow storm blanketed the city under a thick layer which caused a major trouble for the Atlanta traffic. As a result of this Sonny Perdue who acted as the Governor of Georgia last on Sunday night was forced to declare an emergency owing to the extreme bad weather conditions of the state.

The State Meteorological Department had already issued out an alarm before hand that the city would be hit by a nasty snow storm. According to Accuweather reports, the storm is the same one which was responsible for igniting the heavy torrential rain and thunderstorms in Texas on Friday night. The snowfall and sleet has affected several parts of Georgia doing the maximum harm to Atlanta. The city dwellers went through an extremely harrowing situation after Atlanta’s downtown connector had a gridlock all due to the snowstorm. Meteorologists said that while the northern parts of the city experienced the maximum snowfall for which it went under a snow layer of 4-5 inches, the southern part had 1-2 inches of snow layer covering it.

The sleet was the major cause of the tension behind the safety purposes for accidents mostly happen due to the ice covering. As obvious there were news of several accidents due to the heavy snowfall. The harsh weather conditions had not only reaped a major traffic chaos on the roads. Withe the issue of the snowfall threat several airlines had canceled their flights. Hundreds of flights at the Hartsfield-Jackson Atlanta International Airport had to be canceled owing to the threat of accidents.

Soon, a pill to wipe out painful memories!

LONDON - Often there are moments that we wish to forget because they cause us so much pain like the ...

Atlanta 9Georgia, US), - A second Delta Airlines flight was forced into an emergency landing today,...

LONDON - Laughter sounds good only when it's open-mouthed and spontaneous. Conversely, a closed...

ATLANTA (GaeaTimes.com)- Yet another addition to the fast pace of technological advancement, w...

WASHINGTON - Laughter that is genuine, involves the vocal chords, and is made with an open mouth, is...
Copyright© 2011 The Gaea Times