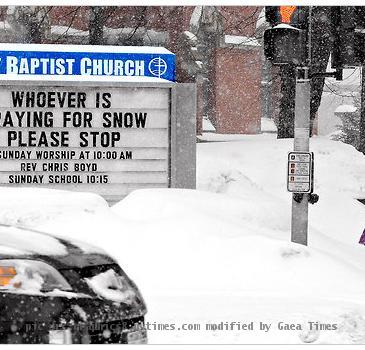 CHICAGO (GaeaTimes.com)- As heavy snow storm and gusty winds engulfed the city of Chicago and many other states surrounding it, the Government of the country is leaving no stones unturned to ensure the safety of the citizens. The Governor of Illinois, Pat Quinn has already declared a State of Emergency to ensure safety of the people in the city. Moreover, the media outlets reported that the schools and colleges and universities of Illinois would remain close till the weather condition gets back to normal. The decision of school closings has been taken by most of the states to ensure the safety of the school children and at the same time the faculties.

Moreover, as the state is hit by the colossal storm, it would be impossible for people to move out of their home and avail transportation. The University of Illinois and also all other major colleges of Champaign and Decatur to Peoria including all the points in between were closed on Tuesday for the major storm. Even Eastern Illinois University in Charleston declared on late Monday that the classes would remain suspended the following day in anticipation of the massive blizzard. However, some schools and colleges were not that lucky and hence the the campus events and other classes were going on in the college as it was scheduled, like University of Illinois‘ flagship campus in Urbana.

On the other hand, on late Tuesday, the schools and university officials had no other options than to declare an off day because of the heavy blizzard that rocked United States. The campus officials have reported that University of Illinois have only been closed twice due to the weather. The National Weather Service has reported that the blizzard is expected to finish on Wednesday afternoon.

NEW DELHI - The Dalai Lama, the spiritual leader of six millions Tibetans and a global icon of peace...

KOCHI - Sixty teams from across the city took part in the multi-city inter school quiz organised by ...

BHUBANESWAR - The Orissa assembly was adjourned several times Tuesday, on the first day of its winte...

Islam one of the great religions of the world: Dalai Lama

NEW DELHI - The Dalai Lama Tuesday hailed Islam as one of the great religions of the world, saying t...

LONDON - A study has suggested that Internet chatrooms and social networking sites are to be blamed ...

WASHINGTON - A new study has pointed out that infants are more efficient at digesting milk than adul...

MELBOURNE - Video footage of a topless young boy resisting a pat down at a US airport has sparked ou...
Copyright© 2011 The Gaea Times