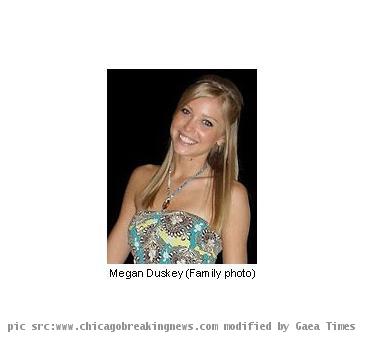 CHICAGO(GaeaTimes.com)- A 23 year old teacher Megan Duskey died at a Halloween party Saturday night when she fell trying to slide down a staircase. The incident took place in Chicago’s Palmer House Hilton Hotel when she fell from the staircase and died instantly. Cook Country medical examiner’s office confirmed her death.

Megan Duskey, the Chicago Public School teacher was enjoying Halloween night with her friends when suddenly the unthinkable mishap occurred. One of the eyewitnesses, Justin Fullmer said that everybody “freaked out” when she fell from the balcony. The unfortunate accident took place at around 10:30 p.m. and the investigators reported that Megan Duskey was attempting to slide down a banister on the mazzanine level of the hotel when she lost her balance and two stories down to the basement level. The hotel officials were unavailable for comments. The police says that Megan Duskey died instantly and police did not find any foul play in the accident. However, they say that alcohol also did not play any role in the death.

Megan Duskey’s family released a statement where it was stated that her “passing” away is a tragic loss to the family and her friends. The statement also read that Megan Duskey was caring and energetic person who was “full of life”. Her family said that she was always eager to help others and make a difference to the whole world. One of the party guests, Ben Clements said that everybody was having fun at the hotel, however, the Chicago Public School Teacher’s death was an “unfortunate” incident. A reputed media source reported that grief counselors will pay a visit to her school to deal with the tragic loss of Megan Duskey. However, the police is still investigating the cause of death.

Baby fat can be a harbinger of serious disease later on

WASHINGTON - Being overweight as a child is a strong predictor of diabetes and cardiovascular di...

WELLINGTON - Television New Zealand (TVNZ) has reportedly turned down reports that viewership of its...

NEW YORK - It seems Olivia Wilde knows how to tackle awkward compliments. Despite being a PETA ...

LONDON - The much reviled and controversial plastic horns that were the highlight of this year's foo...

'Wonder Woman' at war in Hollywood

NEW YORK - Joan Collins, best known as the bitch goddess of "Dynasty", has credited her beauty to Go...

1 in 4 young Australians has a tattoo

MELBOURNE - The trend of getting ink injected into the body is increasing - one in four young Austra...

SYDNEY - Experts have warned that starlets who promote their naked photos and videos are encouraging...
Copyright© 2010 The Gaea Times