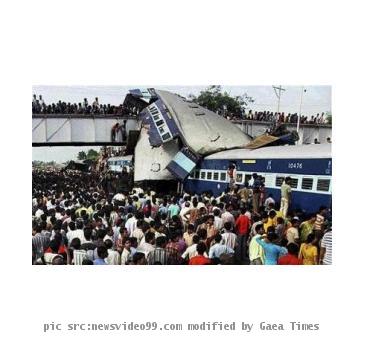 BIRBHUM, INDIA (GaeaTimes.com) — As the morning light came with new hopes for all, people of West Bengal had to face the horrors of a tragedy that took away 70 lives and left 200 people injured. The accident occurred in the wee hours of the morning when the Uttarbanga Express collided with the stationery Vananchal Express near Bolpur, Santiniketan.

The accident was severe enough to kick a compartment over a 25-feet high over-bridge and dismantle 2 other compartments in a worse manner. Although the accident occurred at 2 am, rescue operations started at about 8:30 am when about 49 bodies were strangled out of the Vananchal Express. The death toll is increasing every minute and more people are expected to be inside the dismantled compartments.

Prima facie, this time the accident occurred because reportedly railway officials did not pay enough attention to some important facts. Rescue work is still going on and injured people are being sent to hospitals in Sainthia and Birbhum District. By now, rescue teams from Asansol, Burdwan and Rampurhat have reached the spot.

Due to this accident the schedule of the Eastern Railways has been changed by a notable difference. The Malda Howrah Intercity Express has been canceled and many other trains are not yet back on their tracks.

Meanwhile, the Railway Minister, Miss Mamata Banerjee reached the place and ordered a probe into the accident. Relatives of the people traveling in Vananchal Express are quite worried about the well being of their near and dear ones. A compensation of Rs. 5 Lac will be paid to the affected people.

For your co operation some helpline numbers are given below:

NEW DELHI - The Indian sailing team, which won a silver medal in the match racing event at the ong...

JAMMU - Though the Congress, a partner in the ruling coalition in Jammu and Kashmir, did not raise a...

LONDON - A 20-year-old Brit model has given up her glittering career to fight Taliban in Afghanista...

MUMBAI - They were on duty that day when terrorists struck in Mumbai two years ago. The memories of ...