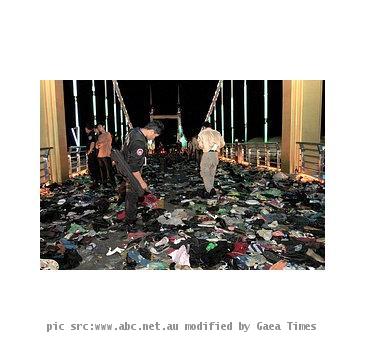 PHNOM PENH (GaeaTimes.com)- The nation of Cambodia is presently mourning for the victims who lost their lives at an unfortunate stampede at the Water Festival on Monday. Phayam Siphan told that 378 people died and 755 people are injured after the shocking stampede, however, he said that the death toll may rise further. The Prime Minister of the country Hun Sen called this day as the biggest tragedy of the nation and he declared Thursday as the National Day of mourning.

Previously the media outlets reported that the military used water cannons to as thousands stampeded over the bridge and many died of electric shocks from the bridge lights. However, Khieu Kanharith, Cambodian Minister of Information rubbished media reports and said that the news is completely false. The authorities have reported that they have set up an investigation board to find out what exactly caused the stampede. Kheiu Kanharith promised $1,250 to the families of victims who died in the accident and $250 to those who were injured. He said that the country needs to draw a lesson from this stampede and at the same time the authorities should concentrate more on the safety of the people.

The eye witnesses reported that stampede in Phnom Penh happened as near about ten thousands of panicked people tried to run away across the narrow bridge to an island in the Bassac River. The witnesses have also complained that the authorities blocked the second bridge which caused much congestion and they blamed that the security system in Cambodia was also slow in emergency response. Khieu Kanharith regretted that fact and said that the authorities concentrated more on the safety measures of water than the land.