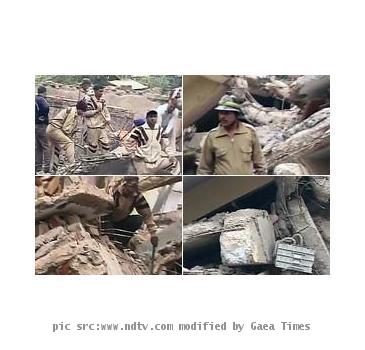 NEW DELHI, INDIA (GaeaTimes.com)- A residential building located in eastern New Delhi’s Laxmi Nagar area was witness to a major disaster on Monday when it collapsed claiming as many as 64 lives. Around 80 residents who were inside the building during the collapse are reported to have suffered severe injuries and they were immediately rushed to a nearby hospital. According to authorities, as many as 30 people are still believed to be trapped inside the rumble and steps are being undertaken to rescue them before it is too late.

The four-storey building where a fifth floor was being constructed illegally, crashed down at around 8 on Monday evening. Kiran Walia, the Delhi Health Minister has confirmed that the death toll has mounted to 64 while adding that it might increase even further. As of now, the reason which resulted in the collapse of the building has not been ascertained and Delhi authorities have pointed out that a magisterial probe has been initiated in the case. Although details about the cause of the collapse continues to remain sketchy, it is being presumed that the building was weakened in the wake of the heavy rains that lashed the city and the overflowing Yamuna river flooded the area.

After the building in New Delhi collapsed, rescue workers from the fire department and National Disaster Response Force rushed to the area and worked unrelenting to clear the rumble of concrete from the scene and bring the trapped people to safety. Delhi authorities have revealed that an increased number of disaster management officials have already been deployed in the area to give an impetus to the rescue efforts.

NEW DELHI - Operations of All India Radio and Doordarshan were affected in different parts of the co...

NEW DELHI - Transgenders are at a higher risk of contracting HIV infection, said a UN report on AIDS...

PM not to blame for delay in reply, Swamy tells apex court

NEW DELHI - To check fraud, the Municipal Corporation of Delhi (MCD) will no longer courier birth an...