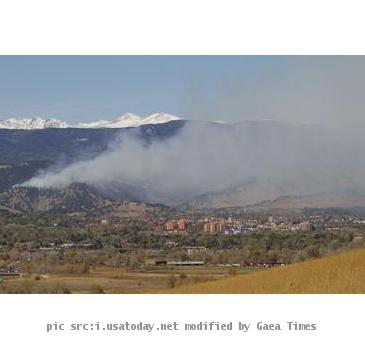 BOULDER (GaeaTimes.com)- The city of Boulder and its foothills are experiencing wide evacuations after two wildfires continue to rage on with residents fleeing their homes in order to take refuge in safer areas. Although authorities are yet to bring the wildfires under control, it has been revealed that the wildfire might lose force and weaken overnight owing to the lower humidity and high temperature that has been prevailing in the area. Details about what actually sparked the fire still remains sketchy but initial evidences suggest that the first fire might have been caused by humans while the second fire was triggered from the first one, investigators have said.

As the wildfires gradually engulfed areas along the Boulder Canyon, a number of residential subdivisons along the western end of the city have been evacuated by the authorities. While divulging details of the steps that have been taken till now to control the wildfires, Boulder County Sheriff’s Office Cmdr. Rick Brough told media outlets that as of now only five per cent of the wildfires has been contained by the firefighters who are trying their best to bring the situation under control. At the same time, it has also been reported that as many as 200 firefighters are likely to work on the flames on Saturday.

Rick Brough further noted that although the firefighters are not going to keep any stones unturned to contain the wildfires in Boulder, at this point a lot depends on the weather conditions. Officials have confirmed that the fire is not as deadly as the September wildfire and any reports of power outrages, loss of life or property has not been available till now.