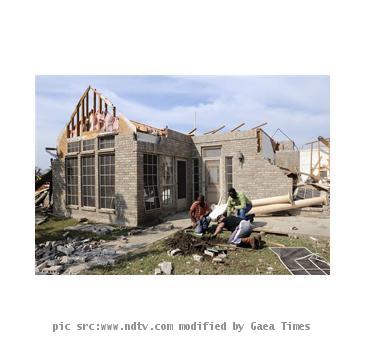 TEXAS (GaeaTimes.com)- Tornadoes wrecked havoc in northern parts of Texas causing extensive damage to homes and transportation. A school complex was damaged badly and several vehicles were overturned by the intensity of the storm. Sources reveal four people got injured in the fiasco though they were not in any danger. Mike Cox the Navarro County Chief Deputy said that some schools had to cancel the classes owing to the tornado. It hit the state on Sunday afternoon. Some freight trains also got derailed after getting hit by the storm. A person named Eric Meyers recorded the ravages of the tornado when he was crossing a highway in a truck. He later said that it was the most fierce storm he had ever seen in his life.

The US National Weather Service admitted that the strong tornado caused significant damage in Texas and a lot of homes were severely damaged. The administration in the affected regions embarked onto damage control mode after the storm left the place wrecked. The twin tornadoes that had hit the state had wind speeds of 35 mph and 85 mph. It was reported by the National weather service.

Eric Meyers was brae enough to capture a tornado live behind the windscreens of his truck. He could feel that the storm was very strong. He saw debris and rooftops flying in almost every direction. The roof of a school was taken off by the storm and it fell in front of his truck. The tornado wrecked havoc in a 11 km area as it was reported later. Luckily no one died in the destructive calamity.