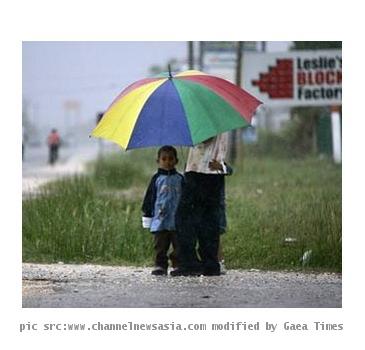 BELIZE CITY, BELIZE (GaeaTimes.com)- Hurricane Richard made a landfall in the Central American nation of Belize on late Sunday, bringing along with it torrential rains as well as heavy winds in turn triggering large scale evacuations. Hurricane Richard which the 17th storm of the 2010 Atlantic season was upgraded to the category of hurricane earlier on Sunday after it attained significant force as it gradually moved towards Belize. However, after making its presence felt in the central American nation, hurricane has weakened as it shifts towards the Gulf of Mexico.

Prior to Hurricane Richard striking Belize, a hurricane warning was already declared in parts of Belize as well as the western coast of Honduras while a tropical storm warning was issued in the east coast of the Yucatan Peninsula in Mexico. The United States National Hurricane Center has said that on late Sunday, Hurricane Richard shifted along west-northwest region in Central Belize while it sustained winds speed remained around 15 miles per hour. However, as the hurricane made its way towards the Gulf of Mexico, it is known to have lost momentum owing to which it has been downgraded into a tropical depression.

Meanwhile, officials in Belize have revealed that an estimated 10,000 people are known to have sought shelter in schools and churches while tourists had been evacuated from almost all the hotels in the popular Toledo District, which is located in the southern region of the country. At the same time, all the flights across the country had been grounded while the international airport in Belize City remained shut on Sunday to avoid any untoward incident.