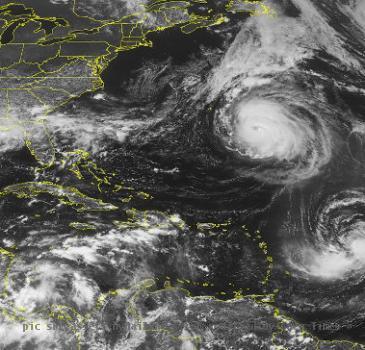 MIAMI (GaeaTimes.com)- Tropical Storm Earl gained strength on Sunday owing to which it is posing the threat of being upgraded to the category of a hurricane. Forecasters of the National Hurricane Center have predicted that the storm is likely to attain momentum while it makes its way through the Caribbean islands along its eastern region. Weather officials have pointed out that tropical storm Earl was making its way towards the Northern Leeward Islands and due to this a hurricane warning have been issued for a number of islands in the eastern part of Caribbean.

In an advisory that was issued by the National Hurricane Center, it was revealed that the epicenter of the tropical storm Earl was at a distance of 420 miles in the eastern direction of Northern Leewards and it was gradually shifting towards the Caribbean islands with a speed of 18 mph where it is likely to reach by Sunday night. While revealing details of the tropical storm Earl, the Maimi-based National Hurricane Center has further divulged that the maximum sustained wind of the storm was 65 miles per hour and it was gradually growing stronger.

Tropical storm Earl comes on the heels of Hurricane Danielle which attained the status of the strongest storm of the 2010 hurricane season after it was upgraded to Category 4. However, as per the latest reports, Hurricane Danielle has subsided to the Category 1 storm and is gradually moved towards the open Atlantic offshore. On Sunday, the maximum sustained winds of the storm had reduced to 90 miles per hour after it weakened considerably from the sustained winds of 105 miles a hour on Saturday.