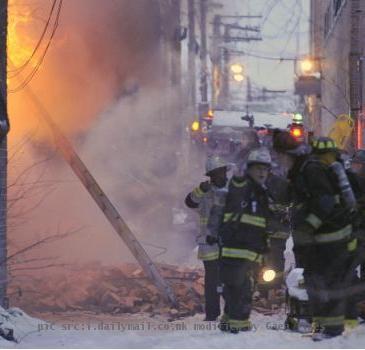 CHICAGO (GaeaTimes.com) - Two firefighters were killed and near about 17 were injured after they were trapped in a building while fighting a warehouse fire. The accident took place in Chicago on Wednesday; the Cook County Medical Examiner’s Office confirmed the deaths. However, the police said that the injured firefighters, who are hospitalized have non-life threatening injuries.

Chicago Fire Commissioner Robert Huff told in the press conference that like a bolt from the blue the roof of the building collapsed and four firefighters were trapped inside it. Robert Huff added that though the fire department put in their best efforts, both in the hospitals and also at the scene, the accident claimed two Chicago firefighters‘ lives. The Fire Commissioner identified the name of two firefighters, who were killed as Cory Ankum and Edward Stringer. The local media reported that on Wednesday, the firefighters went to city’s South Side early in the morning to respond a fire at a deserted warehouse. Robert Huff said that the firefighters were on roof at that time when the roof of the building collapsed.

LOS ANGELES (GaeaTimes.com)- Crystal Bowersox rose from obscurity to fame in less than a year af...
Copyright© 2010 The Gaea Times