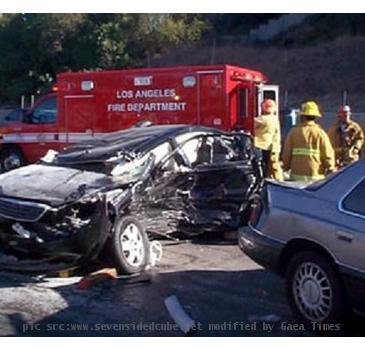 BELLAMY ROAD, CANADA (GaeaTimes.com) — In a car mishap on Sunday morning, a 28 year old man was killed on Brimorton Drive near Bellamy Road. The accident took place when the driver of the car lost control on the road and hit a pole and then a tree.

Beside the driver, the car had a passenger, a 27 year old friend, who sustained some major injuries. But he is out of danger now. Due to the impact of the crash, both the driver and the passenger were thrown out of the car and the car itself was torn into two.

According to Police, although the weather was cold, there was no snow on the road. So, they are investigating whether alcohol was a factor in the incident.

LONDON - A 37-year-old Indian-origin woman was sentenced to 16 months imprisonment for having sex wi...

BEIJING - China, the world's largest auto market, will unveil a new plan for its auto industry in De...

SEATTLE (GaeaTimes.com)- Monday's heavy snowfall has hit the traffic of Seattle severely. The ...

LONDON - The husband of the Indian-origin woman who was killed while honeymooning in South Africa af...

LONDON - Ever marvelled at a taxi-driver's knowledge of a city's short cuts? Well, you can now be ha...
Copyright© 2010 The Gaea Times