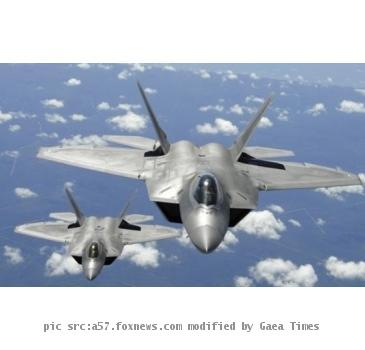 JOINT BASE ELMENDORF-RICHARDSON (GaeaTimes.com)- Air Force officials have initiated a thorough probe to know the whereabouts of the missing pilot of the F-22 fighter jet which crashed near Anchorage on Tuesday. The wreckage of the plane was found on Wednesday morning by rescue teams which were dispatched after the plane went out of the radar and lost contact with the air traffic control as it was on its way to the military base after completing a training session. Air Force officials have revealed that the fighter jet which belonged to the 3rd wing of the Joint Base Elmendorf-Richardson went missing at around 7:40 on Tuesday evening after which rescue teams were sent to the location to find out its whereabouts.

According to Air Force authorities, the wreckage of Air Force F-22 fighter jet was found by the rescue crews on Wednesday morning at a distance of 100 miles from Anchorage. Guard spokesperson Major Guy Hayes told reporters that although the wreckage of the plane has been found, till now there is no word about the pilot while rescue officials are trying unrelentingly to find his whereabouts. The guard spokesperson had earlier added that two helicopters and a C-130 jet would be searching the crash site throughout the night for a sign that the missing pilot was alive and has somehow survived the crash.

While talking about the F-22 crash, Colonel Jack McMullen, the 3rd Wing Air Force commander stated that the main task before the Air Force officials was to make sure that the pilot is rescued while adding that the search operation would continue until his whereabouts are found.