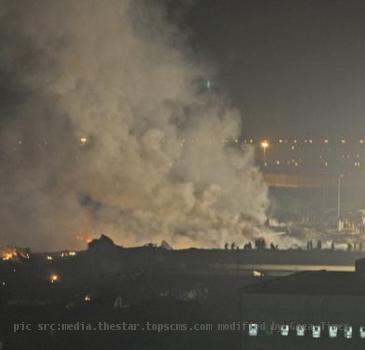 DUBAI, UAE (GaeaTimes.com)- A cargo plane which had two crew members aboard and is owned by the United Parcel Service (UPS), crashed outside the city of Dubai on Friday. The flight Boeing 747-400 which took off from Dubai was laden with children’s toy and many other plastic products and was heading towards Cologne, Germany when tragedy stuck. The United Arab Emirates General Civil Aviation Authority has validated that the two pilots who were aboard the flight when the accident took place lost their lives in the plane crash.

Kristen Petrella, who is the spokesperson of UPS has revealed to the media outlets that the plane crashed at a distance of 16 kilometers on the southeast direction of the international airport of Dubai near a highway intersection. The UPS spokesperson validated that the cargo plane indeed had two crew members aboard but did not divulge any details about the casualties in the crash. At the same time, a statement has also been released by UPS airline and international operations manager Bob Lekites in which the incident has been described as ‘unfortunate’ while it has also been emphasized that the company would be taking all the necessary steps to ensure that the cause of the plane crash can be found out.

Meanwhile, Saif al-Suwaidi who is the director-general of the General Civil Aviation Authority has stated that the pilot of the UPS plane radioed the air traffic control soon after taking off and added that there was fire aboard the flight. The official further added that the pilot was asked to return and land but unfortunately he was unable to track the approach.

MUMBAI - With a view to bringing police services virtually to the doorstep of citizens, a Mumbai leg...

LUCKNOW - The National Democratic Alliance (NDA) would return to power in Bihar, and the Congress' s...

PATNA - With the counting of votes for 243 Bihar Assembly seats scheduled for tomorrow, Chief ...