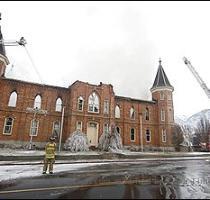 PROVO (GaeaTimes.com)- The city of Provo, Utah has been thrown out of gear after a fire broke out in the city’s historic Provo Tabernacle early on Friday morning. As to what is the reason behind the flames is still not clear. Right now the city officials are deeply worried about the historic landmark which is one of the main tourist attractions in the city. Unfortunately, the main roof of the historic mansion could not be saved as it has collapsed due to the raging flames.

According to sources, rescue unit members rushed to the emergency site around 2:30 in the morning. An eyewitness said that by 6 in the morning the main roof of the Provo Tabernacle had fallen down. Destructive flames engulfed the main roof section as thick smoke emerged out of the fire. It continued to burn for a considerable period of time. The Provo Tabernacle also features in the list of the National Register of Historic Places. Unfortunately, a fire unit spokesperson reported that the walls, peak and gables of the huge red stone building has been badly affected as a result of the fire.

City officials are desperately hoping that the vintage building can be saved once the fire is taken under control. It is quite obvious on their part that they do not want to lose Provo Tabernacle at any cost as it is not only the city’s major tourist attraction but also a pride for the Provo residents. The building was built in the 1880’s and has some unique antique features like hand-crafted stained glass windows, winding staircase, wooden benches made by the actual settlers of the region. The huge ceiling which is beautifully decorated with timbered beams is surely eye catching.

What makes one city better than another?

WASHINGTON - A research team has concluded that in terms of size, New York is just an average city...

LONDON - Genealogists have revealed that Barack Obama and Sarah Palin are 10th cousins through a c...

Unemployment rates in Western metro areas in August, at a glance

Metro areas with the biggest increases and drops in unemployment last month, at a glance

Metro areas with biggest changes in unemploymentThe unemployment rate fell in two-thirds of the nati...

Orange on track so far to reach goals; still lots of room for improvement

Orange on track to reach goalsSYRACUSE, N.Y. — Three games into his second season at Syracuse, coa...

LONDON - Greeks in the 5th century BC were the first to spot the Halley's comet-an event that ma...

Orange prepare for ZipsSYRACUSE, N.Y. — Doug Marrone embarks on his second year at Syracuse with t...