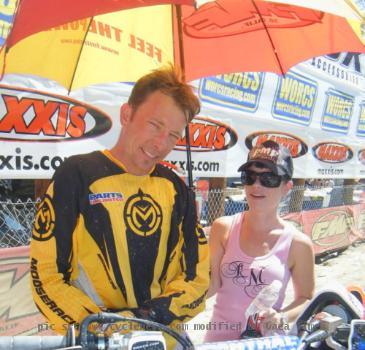 TAFT (GaeaTimes.com)- Two-time WORCS Champion Nathan Woods succumbed to his injuries following an accident at the Honolulu Hills Raceway in the city of Taft in California. The much-acclaimed bike racer was part of a practice session for the current season of the World Off-Road Championship Series when tragedy stuck as he went on to slam his bike along the motor-cross portion of the race track resulting in the accident that ultimately claimed his life. The 32-year-old off-road bike racer, is survived by his wife Amanda as well as his two sons, Nate and Braxton.

The fact that Nathan Woods is no more has been affirmed by WORCS in its official website. The post published in the website reads that the world of off-road racing has lost one of its greatest champion. The statement further said that the biker racer would be dearly missed while adding that their thoughts and prayers are with the Woods family especially his wife and two kids at this moment of distress. Although intrinsic details about the accident continues to remain sketchy, reports have stated that Nathan Woods was thrown away from the bike while attempting a jump and afterwards he was airlifted to a nearby hospital where he was pronounced dead.

The news of the untimely demise of Nathan Woods under such tragic circumstances has left his followers devastated as they are finding it hard to believe that the noted off-road bike racer is no more. Nathan Woods has been associated with off-road racing for the past nine years in which he has won the WORCS championships twice.

Being axed "was definitely devastating, but I've moved on": Hauritz

SYDNEY - Australian spinner Nathan Hauritz has admitted it was 'devastating' for him to absorb the n...

Smith 'quite surprised' at dumping of Hauritz for Ashes opener

SYDNEY - Australian all-rounder Steven Smith has said that he is "quite surprised" at the dumping of...

SYDNEY - One of the least respected figures in English cricket, Duncan Fletcher, has riled Australia...

I am not the next Shane Warne, says Doherty

MELBOURNE - Uncapped left-arm spinner Xavier Doherty, who has been included in the Australian squad ...

Time running out for Hauritz, as other Oz tweakers make Sheffield Shield impact

SYDNEY - Time appears to be running out for Test off-spinner Nathan Huaritz. In a match where he ...
Copyright© 2011 The Gaea Times