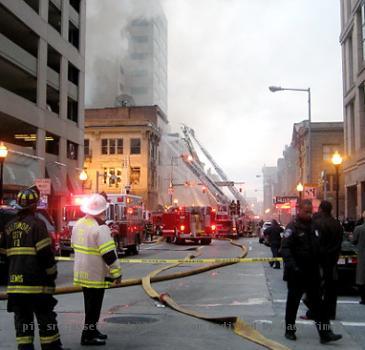 BALTIMORE (GaeaTimes.com)- Baltimore’s red light district was engulfed by a huge fire that was sparked on Monday afternoon that charred as many as four buildings. Although the actual cause of the blaze is yet to be ascertained, city officials have affirmed that the fire broke out in a three-storey building in the area that is popularly known as The Block that houses a number of adult businesses that includes strip clubs as well as other kinds of adult entertainment parlors. A probe has been initiated by the Baltimore city officials to know details about the circumstances that led to the fire while no injuries have been reported as yet.

According to officials of the city’s fire department, that blaze was triggered at around 4 p.m on Monday and soon as many as 2,000 people were evacuated from the adult entertainment zone of downtown Baltimore. The blaze which is being cited as the largest fire incident to take place in the city for the past ten years, was brought under control by as many as 150 firefighters as well as large number of other support staffs and paramedics. While reacting to the fire incident, Baltimore Mayor Stephanie Rawlings-Blake told reporters that all the buildings in The Block would be inspected by the authorities properly before normalcy returned in the adult entertainment zone.

However, this is not the very first time that the red light district of Baltimore was witness to such a massive fire. Way back in 1904, the area was ravaged in a fire of huge blaze followed by a similar incident in the year 1935 which destroyed extensive parts of The Block. Another fire broke out in the area in the 1960’s.

WASHINGTON - A new, highly sensitive investigative blood test may help predict the risk of he...

Catholic Church to train priests on how to perform exorcisms

NEW YORK - Catholic Church is holding a two-day conference in Baltimore to train priests on how to p...

LONDON - Researchers at University of Maryland in Baltimore have found that when newborn female rats...

New York (GaeaTimes.com) -- After a couple of years' dedicated work Sprint is here with its 4G W...

BALTIMORE (GaeaTimes.com)- Sister Virginia Muller might not have heard the name of Honus Wag...

LONDON - Researchers at the University of Maryland School of Medicine in Baltimore have discovered t...

"Skins" TV Series Will Now Be On MTV USA

LOS ANGELES, (GaeaTimes.com)- MTV has been shifting it area of focus from just music to inno...

Man who tried selling arms to LTTE convicted in US

WASHINGTON - A Singapore man who tried to sell arms to the Liberation Tigers of Tamil Eelam (LTTE) h...
Copyright© 2010 The Gaea Times