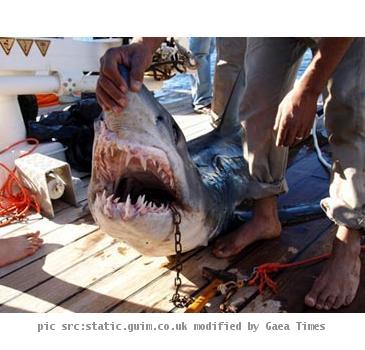 CAIRO (GaeaTimes.com)- A German woman who was holidaying in Egypt died after she was attacked by a shark, the security officials announced the news on Sunday. The incident took place near the popular Egyptian resort Sharm el-Sheikh and the media outlets reported the search team closed the beaches along the Red Sea Coast of Egypt on Sunday to look for the sharks. The law enforcement officials said that the 70 year old woman died on Sunday after she was attacked by a shark while she was swimming near the Red Sea.

Shark attack in Egypt has shocked the citizens as it is the third attack near Red Sea Coast within a week. The medical officials reported that the tourist died immediately after the shark mauled her arm and thigh. Egyptian Tourism minister Zuhair Garana explained her concern and said that this kind of shocking incident has never happened before and the Government has no explanation for this. He said that they are getting marine biologists from other countries to assess the situation to know the change in the biological nature of the place. Rolf Schmid, the manager of the Sinai Diver’s Centre said that this kind of incident never happened for the past 10 to 15 years.

The doctors say that the German woman died due to loss of blood. The Tourism minister said that every beach in Egypt has been closed after the shark attack except Ras Mohammed, which is situated at the south of the city. South Sinai governor Mohammed Shosha said over-fishing might be one of the reasons which as forced these sharks to come near the shore. Miami’s Bimini Biological Field Station’s head Samuel Gruber said that the whole incident is “unprecedented”.

LONDON - A new analysis by an international team led by a University of Washington fisheries scienti...

LONDON - It is true - good-looking people do earn more than average-lookers. The new illustrated ve...

LONDON - An American man who discovered yoga and meditation as a teenager holds the world record for...

Did you ever want to be a shark? Your dream can now become true. Controll a shark, which hunts a swa...

Great whites ended up in Mediterranean after 'wrong turn' 450,000yrs ago

LONDON - A genetic study has suggested that the great white shark may have ended in the Mediterra...

Man to live with spiders to raise money for charity

SYDNEY - Australian golfer Greg Norman has taken another swing at marriage, after he tied the knot f...

WASHINGTON - Researchers, who examined the interactions between wolves and elk in the United St...
Copyright© 2010 The Gaea Times