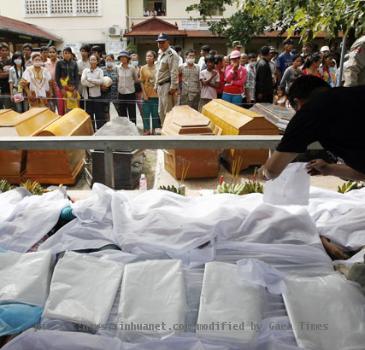 PHNOM PENH, CAMBODIA (GaeaTimes.com)- In order to pay their homage to the victims of the tragic festival stampede, Cambodia is observing a day of mourning on Thursday with more than a thousand people killed or injured in the incident. Despite the fact that on Wednesday the Cambodian authorities had put the death toll figure at a staggering 456, the very next day, the number of total people killed in the incident was lowered by 100 with officials citing the reason for the error as overlap in statistics. A preliminary probe which was launched immediately after the tragic incident that took place earlier this week, has divulged that the stampede was triggered due to the swaying of the bridge at the site of the festival that sparked panic among the people.

A ceremony was organized at the scene of the stampede on Thursday in which Cambodian Prime Minister Hun Sen joined the families of the victims of the tragedy as they lit candles at the narrow bridge. The early morning ceremony was also attended by other government officials which included Foreign Minister Hor Namhong as well as large number of school children who paid floral tributes to the people who lost their lives in the horrifying incident. Moreover, to mark the day of mourning, flags were flying at half masts at the government buildings across the capital of Phnom Penh as well as the rest of the country.

Chronology of world's worst stampedes in 2010

BEIJING - The following is a chronology of the world's worst stampedes in 2010, reports Xinhua Tuesd...

PHNOM PENH - At least 180 people were killed in a stampede as thousands of people celebrated Cambodi...

PHNOM PENH - The death toll from a stampede at a festival in the Cambodian capital of Phnom Penh Mon...

Clinton in Australia for talks on boosting military ties

WASHINGTON - A new research has revealed that volcanic eruptions affect rainfall over the Asian ...
Copyright© 2010 The Gaea Times