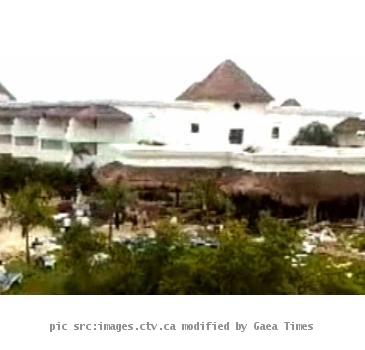 PLAYA DEL CARMEN, MEXICO (GaeaTimes.com)- For people residing at the Grand Riviera Princess hotel which is located in the Mexican resort city of Playa del Carmen, holiday mood turned into their worst nightmare when an explosion ripped through the resort claiming seven lives. According to Mexican authorities, as many as seven people which includes a minor have been killed in the blast while around seventeen suffered major injuries apart from the extensive damage that has been caused to the hotel.

Officials at the Grand Riviera Princess hotel have told reporters that the blast took place at around 9 on Sunday morning in the lobby of the hotel. Following the explosion, emergency personnels and rescue officials rushed the scene without any kind of delay and transferred the injured to the nearby medical facilities where preliminary treatment was administered to them. Earlier on, police commander Arturo Guillermo had said that blast at the hotel in Playa del Carmen was triggered by a stove explosion in its kitchen.